The day a white-tailed eagle appeared out of the mist 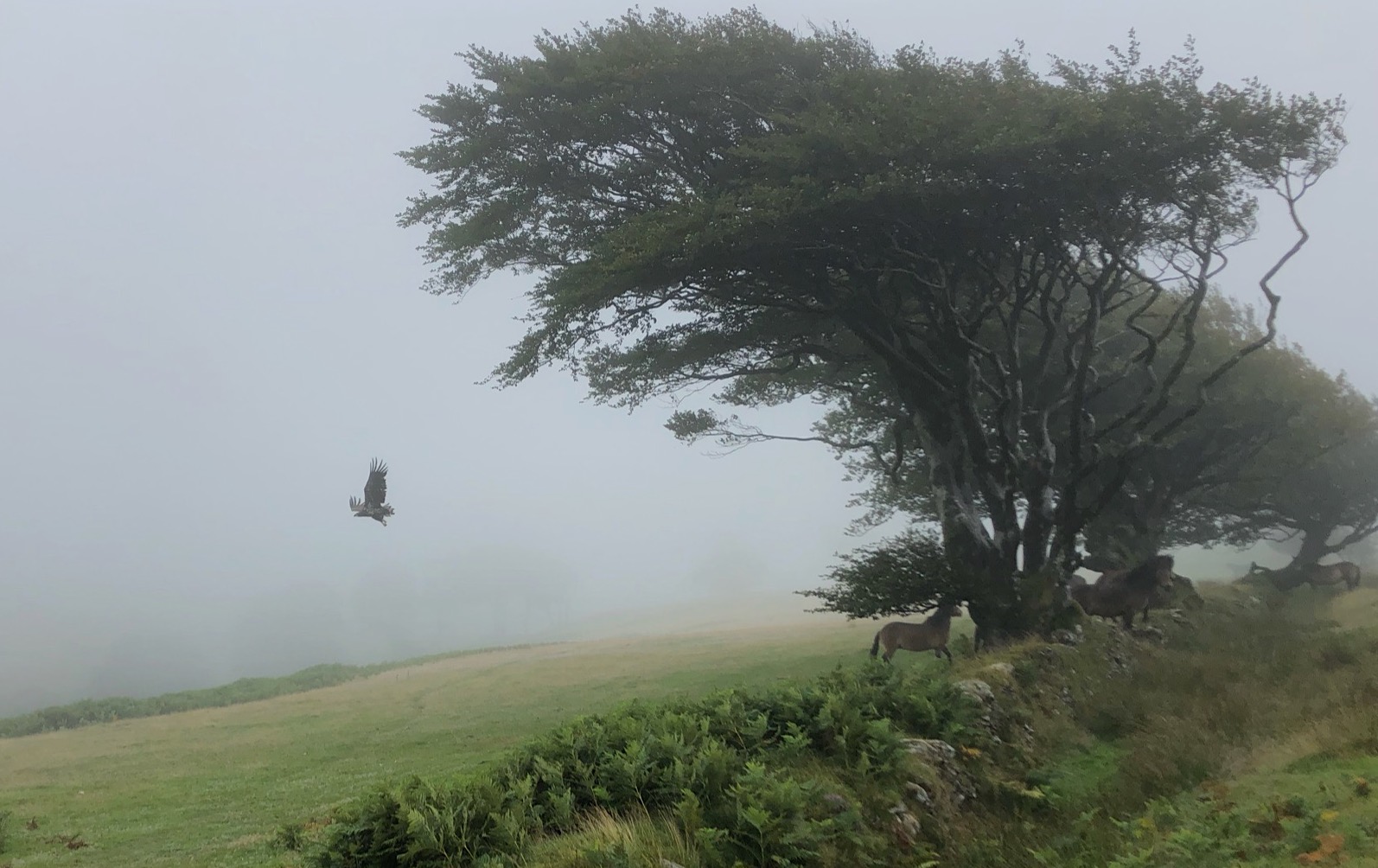 Foggy conditions can be the best time to see wildlife on Exmoor. A kind of twilight descends and the wild creatures are bolder. On the moor above Lynton, “each hill had a hat, a mist-hackle huge”, to borrow a line from the medieval poem Sir Gawain and the Green Knight. When mist falls in Arthurian quests, it is a sign that something magical is about to happen.

We had been riding for about an hour towards The Chains, a high, remote plateau, accessible only on foot or horseback. Passing through a series of old field enclosures above Hoar Oak Water, four red deer stags materialised in the bracken. There were three big, mature males, their magnificent branching antlers still grey with velvet, and a pricket – a teenage stag – whose spikes were shorter than his large ears. They gazed at us before cantering away, heads held as still and upright as rocking horses.

We rode on to where a line of wind-warped beeches clung to a bank of turf and stone. For once, the herd of Exmoor ponies sheltering under the trees were not the focus of my attention. There, silhouetted on a low branch, was the unmistakable side-on shape of an eagle. She sat motionless, shoulders hunched against the drizzle, staring away from us down the combe. The profile of her massive beak with its rounded curve and long hook was sharp as a paper cutout. The wild ponies below her snorted and began to trot away, but the eagle never moved.

White-tailed, or sea eagles (Haliaeetus albicilla), are the UK’s largest birds of prey with wingspans of up to 2.5m. Seen so close, the sheer size and heft is breathtaking. This was a young female, known as G405, released last summer on the Isle of Wight as part of a reintroduction project. White-tailed eagles are nomadic in their first few years and can travel great distances: 405’s radio tracker shows she has wandered widely across the country, from southern England to East Lothian in Scotland.

Our route lay directly beneath her perch. As we walked the horses quietly towards her, she turned to consider us, shifted her weight, raised her huge wings and took off, the fingered tips of her outstretched feathers searching and stroking the air as she disappeared into the mist.

First published in The Guardian’s Country Diary column 2 September 2021. Thank you to the excellent Brendon Manor Stables, who I was riding with, and the lovely Bryn, who carried me.