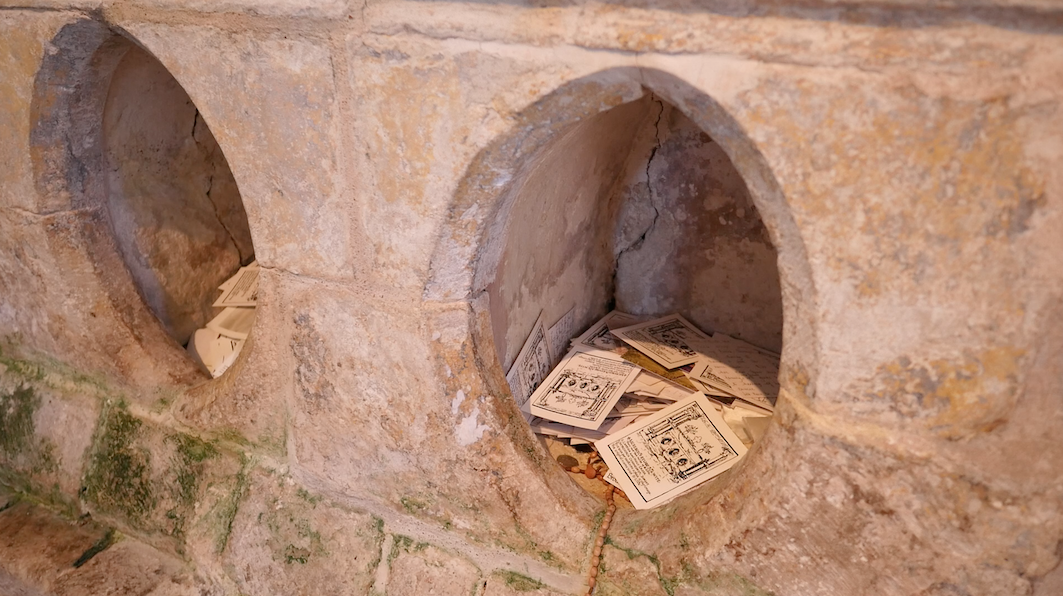 Who was St Wite? Nobody knows. She is a mystery, and that is part of her power. There are no written historical records of her life. But there is a strong and consistent oral tradition that she was a Saxon woman who lived as a hermit on the cliffs near her sacred well. She offered a light to ships at sea and was killed defending the local people against a Viking raid. Soon after her martyrdom, King Alfred the Great built a church to honour her remains.

Saints were once common as blackberries in England. Every rural parish had them, a wild-grown mix of sweet and sharp characters, carrying the heady, slightly winey tang of older religions. These were small, unfamous saints whose holy places were natural features – springs, wells, groves or caves – that had been honoured time-out-of-mind long before Christianity.

Henry VIII did his best to ban saints. In the 16thcentury, his ministers issued a proclamation forbidding their worship. Pilgrimages were outlawed too. Henry made a special example of the greatest cult of them all, St Thomas Becket’sat Canterbury. In 1538 his men destroyed Becket’s shrine and removed wagonloads of treasure including jewels the size of goose eggs. Becket’s bones were taken outside, burned and the remains scattered for dogs to gnaw.

The local, wayside saints had fewer treasures to plunder, but they met the same fate. Hundreds of shrines were smashed, inside churches and without, and their relics broken and burned. The Reformation desolated centuries of art and ritual.

In the whole of England, two shrines survived

One was the shrine of St Edward the Confessor in Westminster Abbey. Edward was a king as well as a saint. Perhaps Henry felt it would set a dangerous precedent to destroy a royal tomb. He took its gold and gems but left Edward’s bones alone.

The other was the shrine of St Wite in the far west of Dorset near the sea. Once a major place of pilgrimage, second only to Canterbury for healing. It too was stripped back and the church made plain and Protestant. Even the carved Saxon font was removed. Yet the shrine and bones of St Wite remained – and are still there today.

Who was St Wite? Nobody knows. She is a mystery, and that is part of her power. There are no written historical records of her life. But there is a strong and consistent oral tradition that she was a Saxon woman who lived as a hermit on the cliffs near her sacred well. She offered a light to ships at sea and was killed defending the local people against a Viking raid. Soon after her martyrdom, King Alfred the Great built a church to honour her remains.

The church was among Alfred’s valued possessions. When he died in 899 he bequeathed the building and surrounding village to his youngest son, Æthelweard. In his will, Alfred called the place ‘Hwitancircian’, showing that from earliest times the place and the church were linked to St Wite.

After the Norman Conquest, William the Conqueror gave the church to Benedictine monks. They renamed St Wite after another saint, ‘St Candida’, whose name means ‘white’. Local people still called her St Wite.

Over the next 400 years St Wite’s shrine became one of England’s greatest pilgrimage sites. People inserted the sick parts of their bodies into one of three oval holes beneath her limestone coffin and prayed for intercession. Lepers had separate openings in the outside wall so they didn’t have to enter the church to pray.

Centuries later, when pilgrimages had long ceased, the Victorians added a layer of scholarly debate to St Wite’s legend. They decided that this ‘St Candida’ was the same as St Blanche, the 6th-century Breton saint from across the English Channel. Both names mean ‘white’ and their myths have similar elements.

What does ‘wite’ mean?

‘Wite’ has long construed as ‘white’. But this is actually a misreading of the Old English word ‘wite’, pronounced not ‘white’ but ‘wheat-a’.

Recently, people have suggested that because ‘wite’ was also a word for a wise man or sage, St Wite’s name means ‘wise woman’. It’s a lovely theory and I wish it were true. Sadly, it’s flawed. ‘Wite’ in this context would be male – it means wise man not wise woman. Changing it to ‘wita’, the female form, is wishful thinking. The saint’s name has been St Wite most consistently, never St Wita, even though the pronunciation is similar.

There are other possibilities. ‘Wite’ had many meanings in Saxon times. King Alfred himself used the word as a noun to mean ‘torment, pain and punishment’ and, in his laws, as a name for a type of fine. He also used it as a verb to mean ‘to lay the blame’ on someone.

Here we have a set of meanings around the idea of punishment, blame and retribution. Interestingly, the word could also mean to ‘keep safe, to guard and preserve’. These are all associations that cluster around women throughout Western culture.

If we combine all the Saxon meanings, St Wite’s name speaks of her wisdom, terrible martyrdom and protective power.

However, my favourite meaning of the word ‘wite’ is as a verb meaning ‘to vanish away.’ Always on the trail of St Wite you have the feeling that you might just be about to uncover a truth, and then she disappears.

My views are guesswork too. I feel that ‘St Wite’ is the Christian manifestation of an older deity of place. Her church is rumoured to be built on the site of a Roman temple – there are Roman bricks in the walls.

I think the woman who became St Wite chose what was already a long-established sacred role. Her story stretches even further back to a prehistoric goddess of springs and wells.

We know there were Iron Age women of high spiritual status living on the coast of West Dorset. A few miles east at Chesil and at Abbotsbury, two rare Celtic mirror burials have been discovered. In each, a wealthy female from the Durotriges tribe was buried in a characteristic crouched position alongside rich grave goods, including a magnificent bronze hand-mirror. These mirrors have highly-patterned backs engraved in swirling designs suggestive of water currents.

Even nearer to where St Wite lived, just a little west over the border into Devon, another Iron Age ritual mirror has been found. This one, at Holcombe near Lyme Regis, was buried in a pit under the floor of a Roman villa. The Romans who put it there recognised and honoured its significance.

The Marshwood Vale where St Wite’s church is set is defined by water. Rainfall pours down off the hills and collects in a puddle of clay at the bottom. Year round ‘Old Bottom’, as it was once known, is wet. In winter it floods. Trees grow fast into early giants, nourished by the deep, fertile soil. Live here, listen to the land, and you come to believe in mutable water spirits of all kinds.

More than a thousand years after her martyrdom, St Wite’s tradition continues strong. The three openings in her shrine are filled with a drift of cards asking for miracles and thanking her for help. Three oval holes – for the Holy Trinity but also echoing the symbolism of the triple Goddess; maiden, mother and crone. On the hill above, her sacred well bubbles clear from the hillside, chuckling quietly.