A fleet of flying saucers touch down near Charmouth 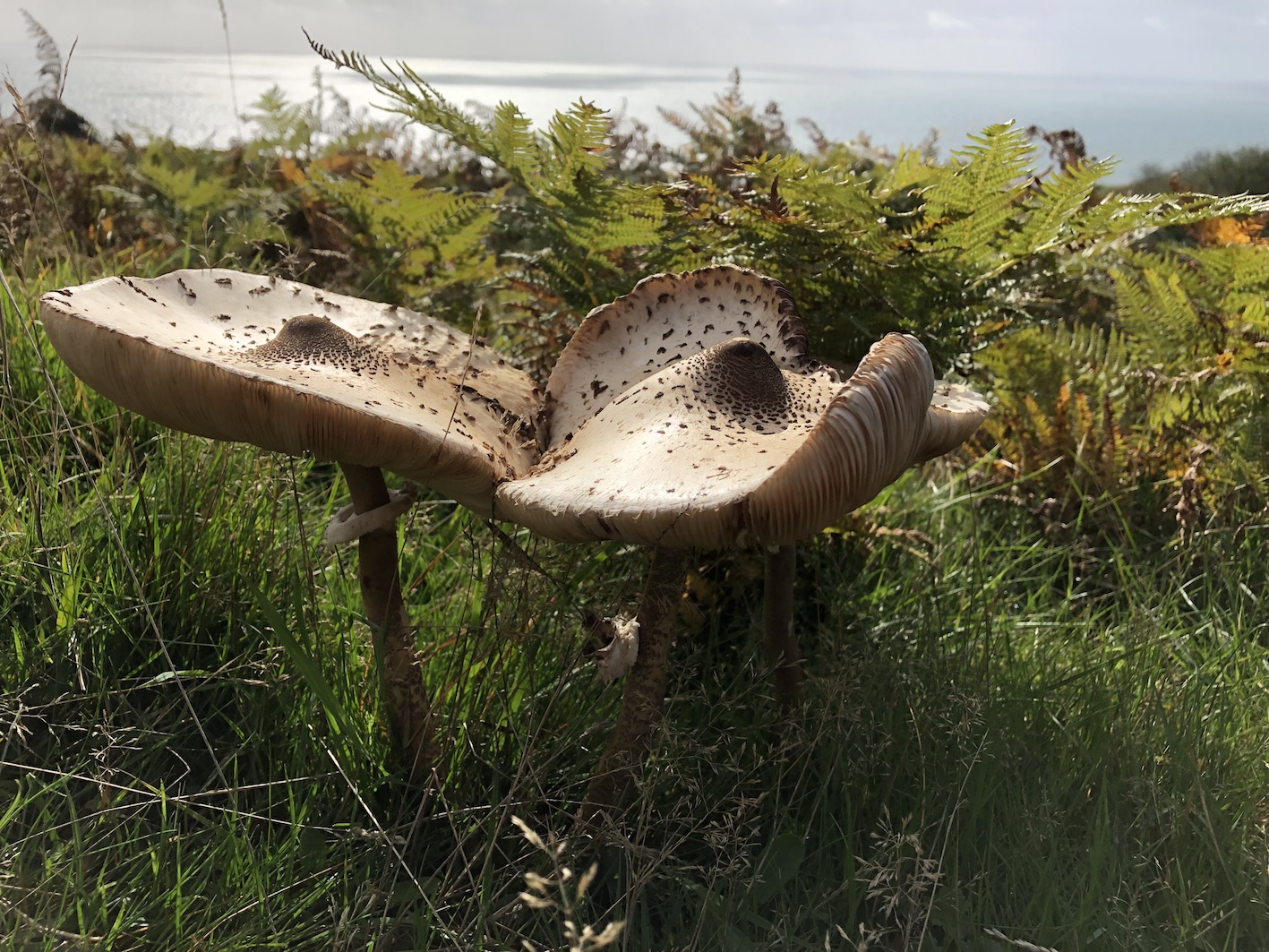 High on the hill above Charmouth the wind blows salty off the sea. There’s an exhilarating sense of autumn being unloosed to tumble inland with falling leaves and scudding clouds.

In the field below the ridge, a fleet of flying saucers has touched down on the grass. Shoals of pale discs catch the sun, wobbling slightly on long stems. As I walk down the footpath towards Westhay Farm, they resolve into parasol mushrooms (Macrolepiota procera). There must be a couple of hundred in the field and, although they are relatively common, I have never seen so many in one place.

As high as my knee

These are huge. The largest specimens reach as high as my knees and have massive, thick caps as wide as a splayed hand. At this size they look as unlikely as the carved wooden toadstools sold in laybys as garden ornaments. They are the palest cappuccino in colour, sprinkled with chocolatey scales. The centre of each cap rises in a pronounced shield boss swelling, the “umbo”.

Many of the caps are tilted, the edges turned up like jaunty hats to reveal creamy gills beneath. In mycological terms the gills are “free”, meaning they are not connected to the stem but curve back to the underside of the cap in an elegant billow. The stems themselves are textured with a snake-scale pattern, and ringed with a double-ruffed collar, so loose that it can be moved up and down. As the fungi age, the length below the collar blackens as if scorched.

The parasols are a magnificent distraction. I’m actually looking for waxcaps. These few acres of rough, unimproved clay pasture are one of the UK’s richest sites for Hygrocybe, with 26 species identified.

Waxcaps are the birthday candles of the fungus world. These small, often brightly coloured toadstools have a waxy sheen, sometimes even a wet, slimy look similar to the gelid glaze on a fancy pudding. Their evocative common names describe them well: blushing, glutinous, oily, spangle, yellow foot, parrot and goblet.

By mid-October there should be lots of them, but I can’t find any. It was a dry summer; perhaps this month’s downpours will coax a late flush.

Originally published in the Guardian Country Diary on 18 October 2019.