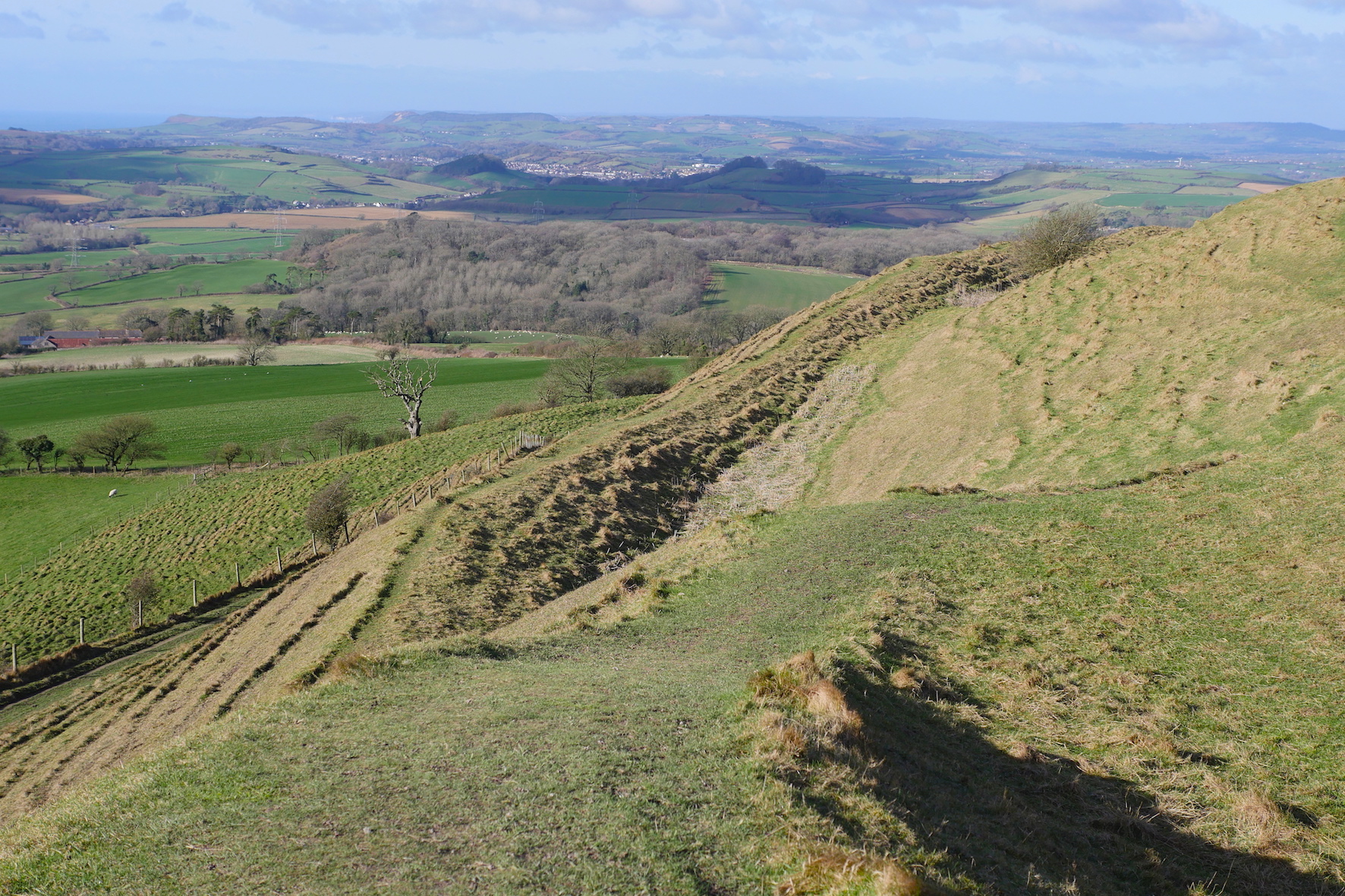 Two Dorset walks commissioned by the Guardian for a spring walk special feature. You can see them on the Guardian’s website here.

Picnic spot: Eggardon Hill ramparts. (You can park at the top of Eggardon Hill). Bring a kite, the hill fort is ideal for kite flying.

Refuel: The Marquis of Lorne, Nettlecombe

This is Dorset as Thomas Hardy saw it – a folded, green landscape of secret wooded coombes flooded with bluebells, contrasting with the high, chalk ramparts of Eggardon Hill. Eggardon was one of the locations for the classic 1967 film of Far From the Madding Crowd, starring Julie Christie. It’s an evocative place; where the sound of the wind thrumming over the grass mixes with endless outpourings of larksong. You might see buzzards and ravens wheeling and tumbling in the air above the escarpment.

Begin your walk in Nettlecombe, a hamlet of golden stone cottages wedged into the side of a hill. The remnants of an old orchard cling to the streamside, a reminder of the days when farm labourers were part paid in cider and every working day started with handing round the cider bucket. The path dips down to the mill and weaves up through a steep coppice starred with the white flowers of wild garlic. Emerging in the open pasture above, you will see Eggardon bulking ahead. The footpath runs alongside the wide hedge on your left, an ancient combination of bank, ditch and hedge, mostly blackthorn. Come at the right time and the sharp twigs will be creamed with blossom.

A bridleway leads up Eggardon’s rumpled north-west flank and takes you to the summit, where you cut across the hill to the banks and ditches on the south. From here there are panoramic views over Bridport and the Marshwood Vale to the coast of Devon beyond. Take the path to North Eggardon Farm and the lane below brings you back towards Nettlecombe. Don’t miss the hidden footpath to the right that twists past the old Powerstock railway station and through a tunnel of hazels beside a mossy stream.

Back in Nettlecombe, the 16th-century Marquis of Lorne has three cosy, wood-panelled bar rooms, a restaurant, a pretty garden and children’s play area. Dogs are welcome in the bar. Main courses include pheasant sausage with mashed potato and onion jus or wood-grilled vegetable and basil pesto lasagne, (£11.25 each). Beer is from Palmers Brewery down the road in Bridport.

Picnic spot: The Warren on the cliffs overlooking Durdle Door (if you don’t want to walk far, park at Durdle Door and stroll up to the cliffs from there).

In the 1920s and 30s the quiet Purbeck village of East Chaldon buzzed with writers, artists and visionaries. They included the reclusive Dorset sage Theodore Powys and his brother Llewelyn, a mystical philosopher who liked to lie naked on the moonlit cliffs. Chief among this circle were the novelist Sylvia Townsend Warner and the poet Valentine Ackland, who met and fell in love there and are buried together in the churchyard.

The area still retains a peculiar, otherworldly feel. On what Townsend Warner called a ‘pearl grey day’, when mist cloaks the downland and the wind oozes through creaking clumps of gorse, it can be positively spooky. Try walking up the crooked valley that leads past the remote farmhouse at Chydyok and to the cliffs. It is a landscape haunted by the past, dotted with prehistoric barrows, earthworks and the shadowy evidence of Celtic field systems.

The scenery changes dramatically when you breast the clifftops and see the Dorset coastline curving before you. Portland floats on the horizon ahead like some fairy isle, seemingly disconnected from the mainland. Make your way to the cliff edge and join the South West Coast Path over the exhilarating switchbacks of Bat’s Head and Swyre. You could hear the dry, clicking call of a stonechat and perhaps see a peregrine stooping on its prey.

At the limestone arch of Durdle Door the sea pools a milky aquamarine around the crumpled cliffs. The beaches are inviting and easy to reach, but they do get busy. To avoid the hurly burly, stay clear of the caravan park and track back through the butterfly rich, flower-filled grassland of Newlands Warren.

Aim for Daggers Gate and return to East Chaldon. The Sailor’s Return is a friendly free house that was once a pair of farmworkers’ cottages. The pub’s name was traditionally written without an apostrophe – not necessarily incorrect. David Garnett, one of the 1920s crowd, wrote a novel named after it and suggested it should have an exclamation mark instead – The Sailors Return! Specials include Purbeck sika venison and wild mushroom casserole (£13) or Cornish hake with chorizo (£14.50).