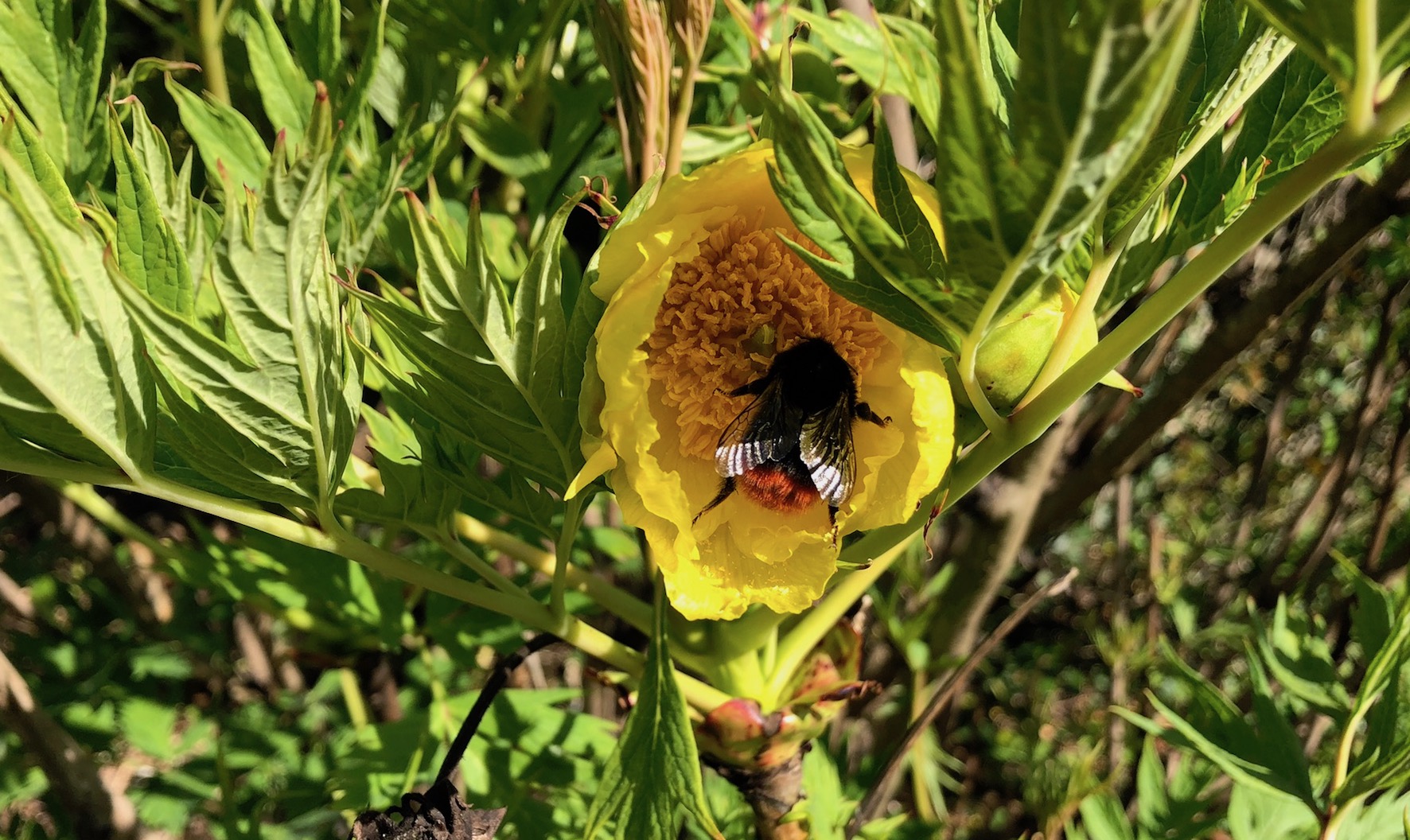 In the garden on a bright morning, with sunshine lancing the cherry blossom, my eye is drawn to the fat glitter of a queen bumblebee gathering nectar in the golden bowl of a tree peony flower. A black, almost velvety, body and rich orange-tipped rump indicate that this is a red-tailed bumblebee (Bombus lapidarius). Her wings shine as if newly waxed, while her tongue briskly probes a tassel of stamens. After a few seconds she’s off to check the next bloom – then airborne again, zooming over the wall.

Lockdown has replaced the background hum of distant traffic with the low, blundering drone of bumblebees. It began in March when buff-tailed queens emerged from hibernation, zigzagging across the lawn. Buff-tails are easily recognised by their size – the queens can be more than 2cm long – and their markings, two well-separated yellow bands and a brown-tinged tail-tip. Because they nest in holes in the ground, they are also called earth bumblebees (Bombus terrestris). The name is like an anchor, tethering a creature of sunlight, pollen and warmth to the chthonic darkness underground.

In city gardens in the warmest parts of Britain, buff-tails can be active all winter. But in this rural frost pocket, those early days after hibernation are perilous. One cold morning I found a queen crashed in the vegetable patch, chilled and stiff. She barely had the energy to raise a leg in warning. I carefully picked her up – she weighed nothing and it was like holding an empty, slightly prickly seed husk. I put her on a clean tea towel and dabbed a small droplet of sugar syrup nearby. Her antennae waved, her mouthparts gaped and she flipped forward a slim proboscis from under her head. Its outer sheath opened slightly and a long, gingery tongue appeared, which she plunged into the syrup.

Bumblebee tongues have hairy ends, good for soaking up nectar. Buff-tails’ tongues measure 5.8mm on average, which is relatively shorter, so they prefer shallow, flat flowers. Garden bumblebees (B hortorum) have tongues twice as long, enabling them to reach into the depths of narrow, tubular blossoms, such as lavender.

As my cold queen sucked the sugar she began to vibrate like a helicopter powering up. When she finished, I took her outside and she flew away.

First published in the Guardian Country Diary column, 8 May 2020.