A walk on Hardown Hill

‘Old Bottom’ has filled up with autumn rain and it’s time to head for Hardown Hill. A piece for the Guardian’s Country Diary.

Hardown Hill is one of a circle of hills and forts ringing the Vale. Steep sides of deciduous woodland and gaps of rough pasture run up to a flat top of heath where nightjars call in summer. The summit is open, unfenced commonland, home to sand lizards and occasionally Dartford warblers. Villagers used to cut the heath for fuel. Gorse was particularly prized in bread ovens because it burned quick and hot before disintegrating into an insignificant pile of fine ash. In Dorset dialect, gorse was furze, pronounced ‘vurze’, just as ‘fox’ was ‘varx’.

I walk clockwise into the low sun shining sharp across the heath. Long wires of purple moor grass gleam metallically and the last few gold leaves on a silver birch flutter like tinsel against the hard blue sky. It’s raining in Devon out to the west and the far hills are smoky purple under cloud shadow. North east lies Rogue Male country, where the unnamed hero of Geoffrey Household’s classic thriller literally went to ground, burying himself in the damp tree roots of an old hollow-way.

I skirt the old quarry workings, swamped in spring with bluebells and now swathed with rusty bracken. A last cricket chirps slowly like a smoke alarm with a near exhausted battery. The sea dazzles through a sudden gap and the sea-swell sound of traffic on the A35 washes up from below. Due east, the long, thin wedge of Portland floats impossibly high on the horizon. 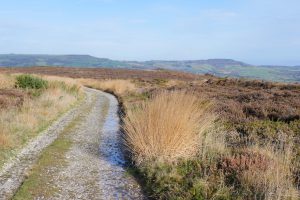 I head back west over the crest of the hill and into the wind, which rattles the heather. Three species grow here; ling (Calluna vulgaris), bell heather (Erica cinerea) and cross-leaved heath (Erica tetralix.) The rain has caught up with me and a rainbow appears, arcing over the hill. I turn away and walk on; when I look back it’s gone, switched off abruptly as the shower moves east.